This project was a co-op project with one of the art students at my school, Johanna Liw. She made all the modular pieces and environment assets for this level.
I wanted to create a level inspired by the game Bloodborne. To recreate and build a level with the same feeling the game has both in their level design and also the mood along with the storytelling they give with their level art.

After defeating the dragon, the next moment is to traverse the marketplace to reach the checkpoint, which the level loops back to two times. There’s only one way to go: the first exit to the right; find the key to open the other two gates. This path leads the player to a new area. The new location also loops back to the checkpoint and the last step of the level, which is the boss fight in the castle.

To make areas stand out and for the player to recognize where they are I made point of interests with storytelling details and worked a lot with Rule of third. By design a lot of the views with rule of third I could create interesting and impactful areas which both look beautiful and interesting.

To guide the player forward I made sure to use leading lines, both with the textures of the meshes but also with the paths that the player needs to take to progress through the level.

The city of Summertide used to be a pleasant city where many merchants came to buy and sell their crops and craftworks. Due to their corrupted queen, who turned mad and made a pact with the elder dragon, the city started to die out, and the citizens who stayed got twisted and turned as crazy as their queen. Now the player needs to fight her inside her castle. But to get there, the player needs first to battle the elder dragon, get the key to the town's gates and reach the court, trying not to get killed by the corrupted citizen still walking the streets.

How I Show It 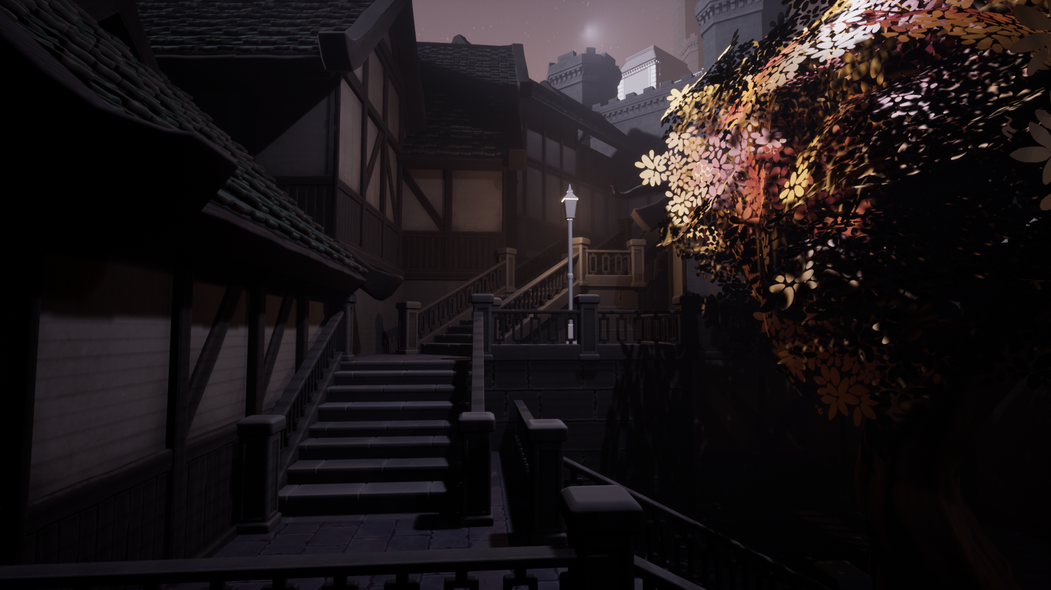 In the pre-prod phase, Johanna and I started looking for inspiration on what she wanted to do and what kind of game I wanted to make a level. When we found something that both wanted to work with, we started working on an asset list for the whole level. When we had finished the asset list, I started sketching on a top-down map of the level with information on where I should introduce enemies, necessary pickups, and other not so necessary pickups along with gameplay elements. After the concept and brainstorming were done, we created a working pipeline thru GitHub with an Unreal Engine 4 project so I could start with a blockout of the level while Johanna began to make the assets. She could update the meshes while I worked with them without any inconvenience.

Looking back on the project now I can say that I’m proud of the level. It gives me the feeling I wanted to deliver. I’ve learned to cut things out I might have wanted to do due to the time limit, but I really managed to get a lot of work done and still make the level fun and interesting. I wish I hade the time to make every house more unique and interesting.